“Pretty much, Mason.” There is a pause. It’s time to get down to business. “So what’s been going on?”

“Well, not a lot. However, I was alerted to an interesting situation in Bowers this past week.”

“Bowers. What’s going on down in Bowers?” he asks, sit-
ting up.

“Dog fighting, what kinds of dog fighting are we talking about?”

“If you are referring to what types of dogs are being fought, then it’s pit bulls.”

“Well this is terrible, Mason! How in the hell did you find out about this?”

“A constituent: a man by the name of Julius Reynolds. A coon ass from the swamp lands.”

“Coon ass? Reynolds doesn’t sound like Louisiana to me.”

“Yeah, I know. By the sound of his voice I thought he was a Yankee, but he’s from New Orleans.”

“That’s an easy mistake to make, Mason. They sound similar. So tell me about this Julius Reynolds fella.”

I proceed to tell my boss all the details, including the part about Bowers Power, Inc.

“As I’ve told you, sir, I don’t know how to proceed, as all other governmental avenues have been exhausted. I guess we are Mr. Reynold’s last resort.”

“Have you tried the attorney general’s office?”

“Not yet, Mason. Before we do that we should try to figure out all we can ourselves…with the help of Mr. Reynold’s of course. Such as, who licenses dog kennels? That might be a good place to start.”

“Well, it would have to be the TDLR.”

“I’m not as good with these damn acronyms as you, Mason; who is that again?”

“The Texas Department of Licensing and Regulation.”

“Good thinking, Mason. See what they have to say. And remember…be discrete.”

Something’s been eating at me since I left the apartment; that something is Keith. I change the subject—again.

“We wouldn’t need so many of these acronyms if we legalized drugs.”

“The TD—whatever the hell they are—they don’t regulate drugs, do they?”

“No sir, if it’s legal then it’s the FDA, with edicts occasionally from the DEA. What I’m talking about is illegal drugs.”

“Christ NO! Jesus, Mason, we can’t do that. Are you out of your mind?”

“Not in the least bit, sir. Think about it…think about all the agencies that exist in law enforcement specifically because drugs are illegal.”

“Well, I know the DEA is a huge cost to the federal government.”

“And a fucking failure!”

“I love your passion, Mason. It’s one of the things that makes you so good at what you do, but no. It won’t work, think about the unintended consequences.” 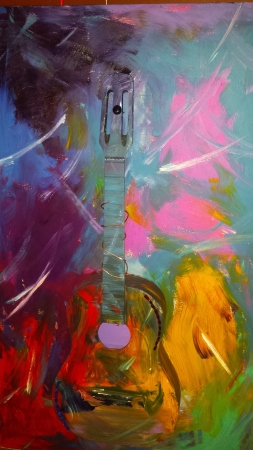 The evening of Saturday, July 9th I popped into B R Vino in downtown Rosenberg’s Cultural District. The atmospheric wine bar doubles as an art gallery. On display was local artist Orlando Reyna.

Reyna’s art varies from multi-medium pieces to traditional canvas paintings. He has found his niche in the painting and resining of old acoustic guitars. Reyna’s palette offers the eyes a mixture of the bizarre, and dare I murmur…even the beautiful.

Reyna’s virgin offering in the guitar series is titled Lighting Strike. Imagine an eighties L.A.-style abstract fashioned in the underworld, roughed out over a macabre background of dark blues and purples. The patches of red, magenta and yellow serve not to brighten but to burn. The single coil of copper that snakes its way up the fret board is a fitting garnish.

Other standout guitar art pieces are Dia De Los Muertos (Day of the Dead.) The background 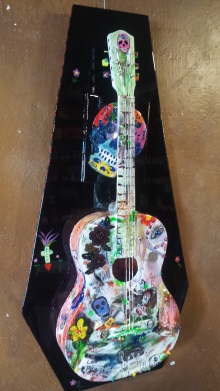 from which the painted guitar is fastened is in the shape of a jet black coffin. Night of a Thousand Drunken Vatos is as colorful and crazy as its title suggests. Lluvia Purpura (Purple Rain) is a tasteful tribute to the late Artist Formerly Known as Prince.  These guitar art titles are just a sample in a collection of many noteworthy pieces.

The bulk of Reyna’s canvas paintings, set against the guitar pieces, serve largely as filler. There are several worth citing due to their individual merit though. Sin Sentido (meaningless,) has a portal effect reminiscent of Mark Rothko. Breath of Fire, with its diagonal brushwork and vivid colors is engaging, as is Mascara Rojo (Red Mask.)

The center piece which ties the entire exhibit together in a loose theme is the canvas painting, Cabeza Loco. With its large, scribbled, skeletal-like visage and graffiti scrawled backdrop, it would hang perfectly at home in the dungeon of one of Walter White’s competitors.

Reyna’s brush technique is a self-taught, largely staccato application. His style is notable for his ability to lift dark undertones out of even the brightest of colors.

Orlando Reyna’s art collection will be on display at B R Vino’s through September. Stop by for a drink, a bite and a gander.

Matt Minor is a culture columnist for the Fort Bend Herald.

I have to meet my boss at his place of business in Wagoneer County. The Rep is a financial advisor by profession and his office is across from the county courthouse. When I get there, a strange car is parked where I usually park. I grab my briefcase and hurry inside. I’m late.

“He’s got somebody in his office. I have no idea who he is,” The secretary informs me as I dart past her.

“Ah, Mason, come on in,” he says, standing up from his desk.

“Have you ever met Jack Clark? Jack is a political consultant fresh back from Europe.”

Clark stands up to greet me. He is frighteningly thin and nearly bald. He’s wearing an American flag tie.

“Call me Jack, Mason. You don’t mind if I call you Mason
do you?”

“That’s the handle they gave me, Jack.”

I take a seat next to Jack. We both sit facing the Rep., who sits behind his sprawling, messy desk.

“Jack here was just telling me about England and Amsterdam and…where else did you work?”

“Bulgaria. I worked on the presidential election in Bulgaria. That’s one of the Balkan states.” He turns and addresses me.

“Yes, I know my geography,” I answer.

“Fascinating stuff!” My boss declares. “By the way, Jack and I have been discussing a possible run for Congress.”

“Congress?” I ask. The remark startles me.

“Yes, Congress,” Clark interjects. “The incumbent is very weak. Terrible really. I think your boss has a good shot. Besides, this redrawn House District 100 could revert back to what it was previously if the state loses its lawsuit with the DOJ.”

“That’s right, all these redistricting legal fights with the federal government make campaigning almost impossible because you don’t know where you’re at. That said…Congress is all about raising the money!” the boss interjects.

“We’ll work on that, sir,” Clark concludes. Standing, he shakes our hands, and then excuses himself, leaving the boss and me alone.

“You know, Jack was partners with the late Warren Jenkins.”

“You mean the consultant who was murdered by the cartel a couple of years ago?”

“The very one, although the cartel part was never proved.”

“If I remember correctly, that was pretty gruesome, wasn’t it?”

“Oh yeah, they dressed the sad bastard up in some strange clothing and cut off his balls. Tried to make it look like some deviant sex thing—I don’t really understand. People of your generation know about that kind of shit better than mine.”

“Yeah, that’s right…some kind of S&M thing, but it was a diversion.”

“What the hell does S&M mean?”

“Yeah, I see. The world is pretty sick.”

“It’s always been sick, Mason…it’s just gotten sicker… and perverse.” He adds, “Jack might have suffered a similar fate if he hadn’t been hired across the pond. I think it was good for him all the way around. He used to be kind of chubby.”

I’m tiring of this tragedy turned self-help story and want to discuss what was just actually brought up by Jack Clark.

“So what’s the deal with this congressional run?”

“Not if you can get the cash. I agree with Clark, our guy in the Federal House sucks. He’s a fucking patsy for the establishment. And I think you would have difficulty in the old HD 100, that is if it reverts back to the old lines.” 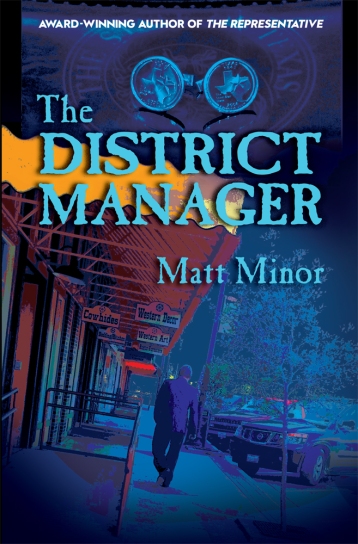 A Meeting With the Boss

It was hard sleeping without Ann. It still felt unnatural even  though I was now crashing on a fresh, smaller mattress. The fact that I knew where she was sleeping every night made it that much harder.

I’d been having some pretty gruesome dreams, of late. But on this night, it was over the top terrible.  It was like one of those campy horror movies—only it wasn’t campy.

I awake like I’ve woken from a bad dream. The bad dream I awake from… I don’t remember. Upon waking I turn and find Ann’s softly curved naked body. Her hip is warm and she starts to moan as I caress its crescent. I nestle up against her and we lie in the spooning position. Her bare bottom is pressed against my groin and I’m getting hard. She releases herself from my right arm, which is pulling her tightly into my erection.

Horrified, I wake. I sit up. This…this was a bad one.

I fall out of bed and hit the flea infested carpet face-first. I can feel the little fuckers tugging on my legs.

The light through the blinds has faded into a paler shade of purple. I look at the clock:  6:15 a.m. It’ll be light soon. I realize that Keith is in the den. I can hear music faintly playing. He’s passed out with the stereo on.

“Mason…” Keith asks. He’s sipping a cup of coffee as I hurry about, getting ready for work, “Do you know anywhere I can get some weed?”

“What?” I ask, flabbergasted. I emerge from the tiny bathroom with a mouth full of toothpaste.

“Jesus Christ, Keith, you know I can’t do that. If I got nailed, not only would I lose my job but I would damage my boss big time!”

“Yeah, I suppose.” He sounds dejected.

“What do you need marijuana for anyway?”

“It helps with the pain.”

“Why do you think I have those prescriptions, Mason? I live with chronic pain. It’s a medical condition.”

“So weed is supposed to help with that?”

“Yes. It helps more than anything; and, it doesn’t constipate me.”

“I knew you did drugs before prison…but how do you know it works on this pain?” I swish water in my mouth.

“Because I smoked in prison.”

“What?” I ask, spitting into the dirty, cluttered kitchen sink.

“Goddamn, these places are worse than even I thought. How the fuck did you get weed in prison?”

“Yeah, that’s right. They sold it to us. It was one of the only things they were useful for.”

“Is this how you used the money I sent you… for drugs?” I ask rhetorically, then comment, “I don’t know, Keith, I was there yesterday and they looked like they wanted us for lunch.”

“Not all the guards sold, only a few. One or two.”

Before I bolt out the door I tell him, “I’ll think about it.”